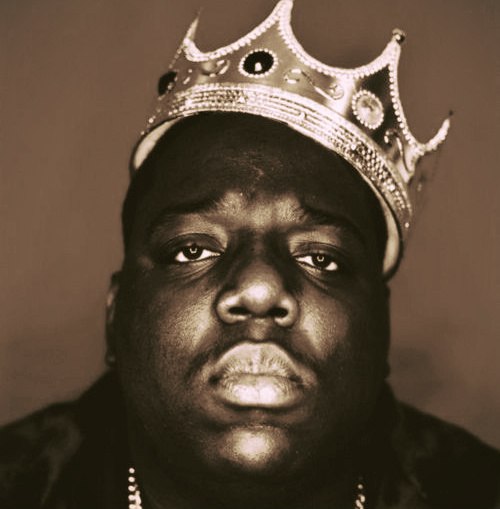 The Notorious B.I.G. (born Christopher George Latore Wallace on May 21, 1972), better known by his stage names 'Biggie' or 'Biggie Smalls', was an African-American rapper of Jamaican descent who grew up on 226 St. James Place near the border of Bed-Stuy, in the Brooklyn borough of New York City. His debut album Ready to Die (released in 1994) help solidify him as a central figure in the East Coast hip hop scene and increased New York City's visibility in the genre at a time when West Coast hip hop was dominant in the mainstream. The album reached No. 13 on the Billboard 200 chart and eventually certified four times Platinum. That same year, The Notorious B.I.G. married R&B singer Faith Evans after they met at a Bad Boy Entertainment photoshoot. The following year, The Notorious B.I.G. led his childhood friends to chart success through his protégé group, Junior M.A.F.I.A. While recording his second album, The Notorious B.I.G. was heavily involved in the growing East Coast/West Coast hip hop feud. In June 1996, Tupac Shakur released "Hit 'Em Up", a diss song in which he claimed to have had sex with The Notorious B.I.G.'s wife (at the time estranged) and that Biggie Smalls copied his style and image. Although encouraged to do so by his entourage, The Notorious B.I.G. did not directly respond to the record during his lifetime, stating in a 1997 radio interview that it was "not [his] style" to respond. On March 9, 1997, The Notorious B.I.G. was killed by an unknown assailant in a drive-by shooting in Los Angeles. His double-disc set Life After Death, released 16 days later, rose to No. 1 on the U.S. album charts and was certified Diamond in 2000, one of the few hip hop albums to receive this certification. The Notorious B.I.G. was noted for his "loose, easy flow", dark semi-autobiographical lyrics and storytelling abilities. Two more albums have been released since his death. He has certified sales of 17 million units in the United States. His lyrics have been sampled and quoted by a variety of hip hop, R&B and pop artists including Jay-Z, 50 Cent, Alicia Keys, Fat Joe, Nelly, Ja Rule, Eminem, Lil Wayne, The Game, Clinton Sparks, Michael Jackson and Usher.