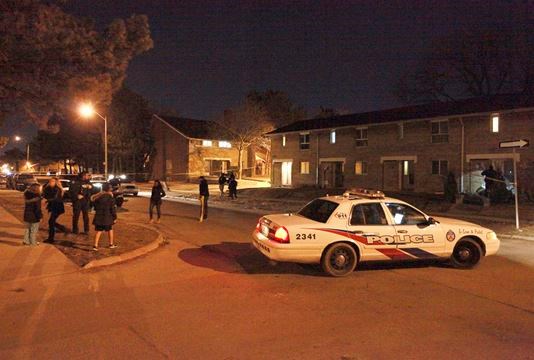 Built as a community housing project in 1966, Jamestown Crescent (also referred to as "Doomstown" by local residents) is a small Ontario Housing community of townhouses near the northwest limits of Rexdale, Ontario in the former city of Etobicoke located off of John Garland Blvd between Martin Grove Road and Kipling Avenue. It is a gated community with no gates, a series of low-rise buildings connected by courtyards with entrances but no exits. Named after Canadian businessman, land developer and residential real estate developer Rex Heslop, this area is officially referred to as "Thistletown" and was developed as a subdivision in Rexdale in the 1950’s surrounded by a large industrial corridor around the area. Back in the mid 1960s, Rexdale was a predominantly white area, and the first residents of Thistletown were mainly of European descent. Jamestown Crescent then became home to a large number of West Indian families during the late 1960's followed by an influx of Somalian and Ethiopian immigrant families by the 1990's. In the relative tranquility of the new suburb, the subsidized homes in Jamestown, a mix of row houses and a few two-storey buildings on tree-lined avenues seemed a sensible enclave. In total, there are 549 homes here and 2,474 residents. Of these, 827 are children under the age of 12. The population is estimated at 70 per cent Somali, 15 per cent Caribbean and 15 per cent "other". 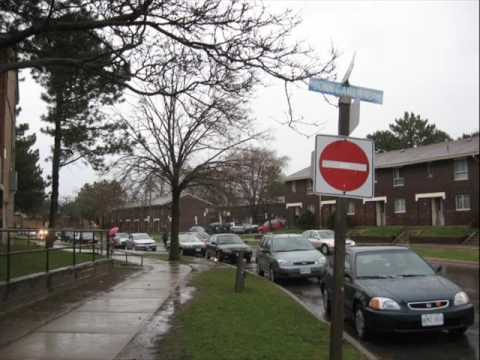 By the 1980s, Rexdale was going through a change where many of the once bountiful manual labour jobs (once held by many new immigrants) became scarce, making way for more office orientation jobs, which many new immigrants found difficult to obtain due to cultural conflicts (among other reasons). The sudden influx of new immigrants, the changing racial demographics, along with the competition for the limited work positions available, helped garner a subtle disdain by long time residence within Jamestown against new arrivals. For a number of years, conflict and tension between the West Indian and Somalian residents had divided the community (especially among youths). Many times the simmering animosity between the two groups resulted in violent clashes. But akin to Toronto's reputation, most residence in Jamestown co-exist peacefully among each other, despite the cultural differences.

By the 1990s, Jamestown Crescent had become notoriously known for gun and gang violence pertaining to the subtle, yet prevalent, drug activity within the surrounding area. Neighbourhood youths began to identify themselves as Crips which had Authorities and the media addressing them as the 'Jamestown Crew', which successive generations have adopted and over time became an entrenched presence within the community. Jamestown has a high number of single parent families living below the poverty line and unemployment among youth is high as well. On average, households report earnings of $47,929, compared to the city-wide average of $69,125. 86% of residents are visible minorities; 51% are Black, the next largest group is South Asian. 60% of Jamestown residents are immigrants; 88% arrived in Canada before 2000. Only 37% of residents over the age of 15 have a post-secondary certificate, diploma or degree. 40% of families are led by lone parents, compared to the Toronto average of 17%. 91% of those lone parent families are led by women. At Toronto Community Housing, a History of Violence