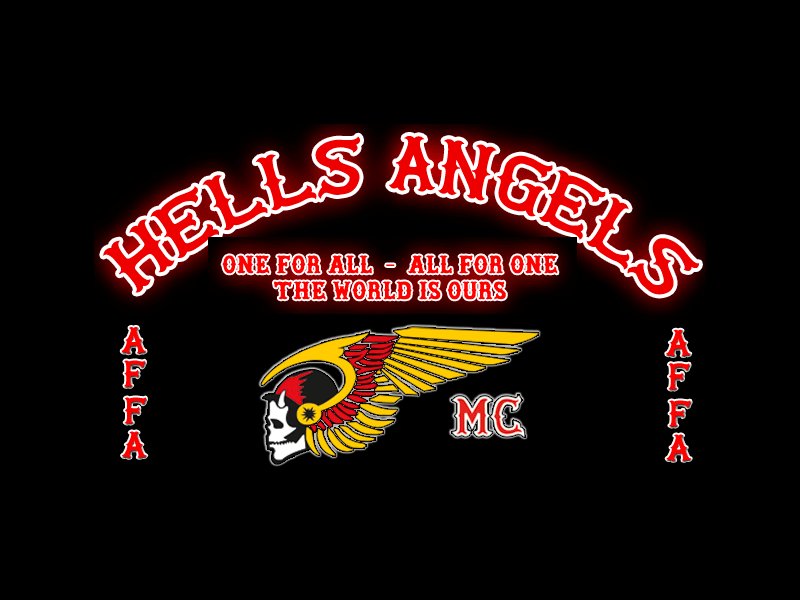 The Hell's Angels is a motorcycle club formed in 1948 in Fontana, California. The club is said to take its name from either the movie Hell's Angels, directed by Howard Hughes, or from the U.S. Army's 11th Airborne Division. It is estimated to have 2,500 members in 227 chapters, located in 30 countries. Some believe this gang came about due to an amalgamation or joining of different motorcycle clubs, such as the Boozefighters and The Pissed Off Bastards of Bloomington. As a collective, the H.A. has been shown to take in large sums of money from illegal activities such as prostitution, illegal pornography, extortion, fraudulent telemarketing and drug trafficking, but the club itself has traditionally claimed that these are individuals within the club that are involved and not the club as a whole. Both the Federal Bureau of Investigation and the Criminal Intelligence Service Canada classify the Angels as one of the "big four" outlaw motorcycle gangs, contending that members carry out widespread violence, drug dealing, trafficking in stolen goods, and extortion. Denmark has banned Hell's Angels clubs and motorcycle gangs, detaining and searching known members on sight.

The Hell's Angels official web site attributes the official "death's head" insignia design to Frank Sadilek, past president of the San Francisco Chapter. The colors and shape of the early-style jacket emblem (prior to 1953) were copied from the insignias of the 85th Fighter Squadron and the 552nd Medium Bomber Squadron. The Hell's Angels utilize a system of patches, similar to military medals. Although the specific meaning of each patch is not publicly known, the patches identify specific or significant actions or beliefs of each biker. The official colors of the Hell's Angels are red lettering displayed on a white background-hence the club's nickname "The Red and White". These patches are worn on leather or denim jackets and vests. Red and white are also used to display the number 81 on many patches, as in "Support 81, Route 81". The 8 and 1 stand for the respective positions in the alphabet of H and A. These are used by friends and supporters of the club, as only full members can wear any Hell's Angels imagery. The rhombus-shaped 'One-percenter' patch is also used, displaying '1%', in red on a white background with a red merrowed border. The term "one-percenter" is a response to the American Motorcyclist Association (AMA) comment in which it stated that 99% of motorcyclists were law-abiding citizens and the last 1% were outlaws. When applicable, members of the club wear a patch denoting their position or rank within the organization. The patch is rectangular, and, similarly to the patches described above, displays a white background with red letters and a red merrowed border. Some examples of the titles used are President, Vice President, Secretary, Treasurer and Sergeant at Arms. This patch is usually worn above the 'club location' patch. 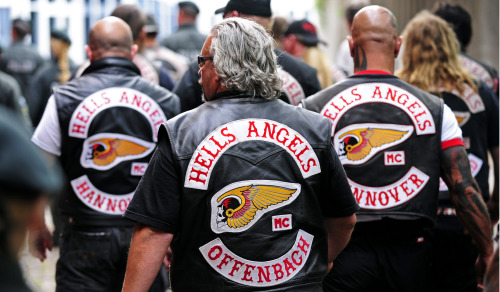 The HAMC acknowledges more than a hundred charters spread over 29 countries. The first official charter outside of the U.S. was formed in New Zealand in 1961. Europe did not become home to the Hell's Angels until 1969, when two London charters were formed after the Beatles invited some members of the HAMC San Francisco to London. Two people from London visited California, "prospected", and ultimately joined. Two charters were issued on July 30, 1969; one for "South London", the other for "East London" but by 1973 the two charters came together as one, simply called "London". The London Angels provided security at a number of UK Underground festivals including Phun City in 1970 organised by anarchist International Times writer and lead singer with the The Deviants Mick Farren. They even awarded Farren an "approval patch" in 1970 for use on his first solo album Mona, which also featured Steve Peregrin Took (who was credited as "Shagrat the Vagrant"). The 1980s and 1990s saw a major expansion of the club into Canada. The Hell's Angels established their first Canadian chapters in the province of Quebec during the seventies. The Outlaws MC and several affiliated independent clubs were able to keep the Angels from assuming a dominant position in Ontario, Canada's most populous province, until the nineties, while the Grim Reapers of Alberta, Los Bravos in Manitoba, and several other independent clubs across the prairies formed a loose alliance that kept the Hell's Angels from assuming dominance in the prairie provinces until the late nineties. By 1997, under the leadership of Walter "Nurget" Stadnick, the Hell's Angels had become the dominant club not just in British Columbia and Quebec, but all across Canada, with chapters in at least seven of ten provinces and two of the three territories.

The Hell's Angels are variously depicted in a similar mythical fashion as the James-Younger Gang, as modern day legends, free spirited and iconic of an era of brotherhood and loyalty, or by others as a violent criminal gang and a scourge on society. Traditionally, their main rivals would include the Mongols MC, Outlaws MC, Bandidos and the Pegan MC.

Shoot Or Be Killed

Victim of a Global Biker Feud

smart motherfuckers! the angels are like the neccasary evil...they keep idiots from whats happening in vancouver right now!if ya shooting up the city the cops are going to be on everyones ass!!MOB!

you gotta thank the H.A for keeping order to the street gangs.. if there was no H.A there would be way more gang realted killings..

U guys r smoking crack...thank god 4 h.a? first of all, they're not "real" angels in the sence that americans never came up to canada and started branches...just a bunch of bikers that was already here started working together rather than against, blessed by the americans. & they dont run SHIT, they push the MOST weight, but they dont run NOTHING other than each other. if angels dropped off 2morrow, somebody would easily take their place.