The West Side (W/S) Denver Lane Bloods, also known as the "Denver Lane Gangster Bloods", are a long standing and infamous primarily African-American street gang founded on the west side of South Los Angeles, California in the early 1970s. The name of this gang derives from a residential street called “Denver Avenue” which sits between Hoover Street and Figueroa Street. They claim as their territory the area bordered by 104th Street to the north, Grand Avenue to the east, 120th Street to the south, and Vermont to the west. The 105 Century Freeway acts as a borderline between the Denver Lanes and the 120 Raymond Avenue Crips, one of their most bitter rivals. The rivalry between the Denver Lanes and the Raymond Avenue Crips was a long and bloody one that has gone on for more than 20 years [1]. The Denver Lanes are also bitter rivals of all Hoover Criminals, particularly the 107 Hoover Criminals Gang and 112 Hoover Criminals Gang [2] as well as the 92 Hoover Criminals Gang and 94 Hoover Criminals Gang. The Denver Lanes were responsible for pushing the 112 Hoover Criminals Gang off of parts of their turf during the early 2000s. Other Crip rivals include the Osage Legend Crips, Eight Tray Gangster Crips, the Broadway Gangster Crips (although they are currently engaged in an unofficial ceasefire), all Hard Time Hustler Crips, the 118 East Coast Blocc Crips, Pimp Town Gangster Crips, Gardena Paybacc Crips, 87 Gangster Crips and the 97 Gangster Crips. Although the Denver Lanes have traditionally been rivals of most Tray(3x) gangs, they do not share the same disdain for gangs under the Neighbor Hood Crips card and have unofficially aligned themselves with the Rollin 60s Neighborhood Crips and the Rollin 100s Crips to take on the Hoover Criminals. The Denver Lanes are also friendly towards the Hispanic South Los 13 gang who share parts of their turf with the Lanes and co-exist peacefully. Not only do the Denver Lanes war with traditional Crip gangs, but they also have had past conflicts with a multitude of fellow Blood gangs as well. Their most heated Blood rivalry was with the Campanella Park Pirus who had murdered Lil Laniak 2; a reputed member of the Denver Lanes [3]. They also have had conflicts with the Inglewood Neighborhood Pirus, Queen Street Bloods, the Bounty Hunters Watts and more recently with the Inglewood Family Gang and the Mad Swan Bloods as well. The Denver Lanes share a close alliance with the Crenshaw Mafia Gang for over 20 years. This alliance was referred to as “Denver Mafias” by the O.G.s and then was coined the “Mafia Lanes” by the following generations. They also have a close-knit relationship with the Athens Park Bloods affectionately called the "Athens Lanes" alliance. The Denver Lanes are also represented in the unincorporated city of Pasadena by the Pasadena Denver Lane Bloods. Other allies include the Harvard Park Brims, Village Town Piru, Blood Stone Villians and the Weirdoz Gangster Bloods. Rappers B-Brazy (L.I.P), Peanut 2 (L.I.P) and Lil' Laniak 2 (L.I.P) who appeared on the Damu Ridas album were from this gang [4]. 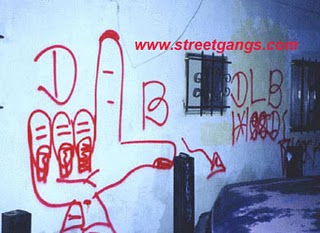 West Side Denver Lane Bloods. This particular hit-up pays homage to the 106, 108 and 109 faction of the gang. Beside it, disrespect to the Hoover Criminals and all Crips.

109th Street Lanes (this was the original set)