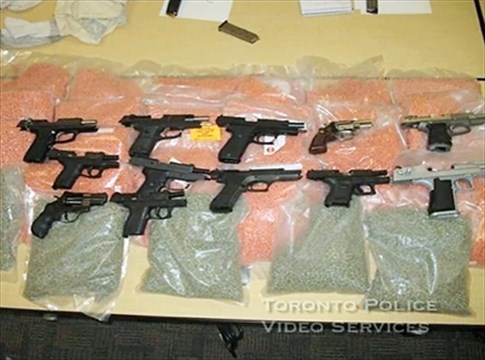 The East Side (E/S) Parma Court Posse are a mid size mainly African-Canadian street gang founded in Scarborough's Parma Court community in Toronto, Ontario, Canada. This gang was formed in the late 1980's to early 1990's and was known as the "Parma Court Bloods" in its earliest conception. Many of its founding members were of Caribbean descent or first-generation Canadians, but would later be superseded by African members by the mid 2000's. The main turf of the Parma Court Posse is centered around Parma Court but members have been known to branch out to the surrounding area as well. The Posse was a heavily organized crime syndicate during the mid-90s responsible for the city's rise in narcotics, arms and human trafficking. Their main rivals are the Chester Le Crew and the ABG. During the late-2000's the Posse had strong relationships with members of the Malvern Crew however that relationship hadn't lasted long as a rift developed turning once allies into sworn enemies in the 2010s. They are heavily allied with the Silent Soldiers of Regent Park as well as the Guilty Crime Posse of Flemingdon Park. Many community members of Parma Court consider either to be a second home. During the early 2010s, the Posse made it acceptable for both Blood and Crip associated members to join.