The Manitoba Warriors are an Aboriginal based prison and street gang founded in Winnipeg, Manitoba, Canada. The Warriors (as they are referred to) began as an exclusively Aboriginal based criminal organization and prison gang in 1992 by incarcerated Native and Meti inmates to rival traditional Biker/Aryan gangs and to protect Native and Meti inmates from Biker aggression. Upon release, members of the prison gang began recruiting young disenfranchised Aboriginal youths in their respective neighbourhoods thus bolstering their numbers. Police estimate that membership of this gang range in the hundreds and span across at least two Provinces.

According to one former president Brian Contois, The Warriors was founded on a code of ethics aimed at bringing some level of morality, pride, and dignity to a way of life that most poor inner-city Native men had no choice but to follow [1]. It was thought where police had failed to protect the neighborhood, the Warriors would successfully invoke the threat of collective violence as a potent disincentive to the bullying behaviors of the other North End gangs that enjoyed a demographic advantage. In its earliest incarnation, moreover, the Warriors provided security for weddings, banquets, socials and powwows. The gang demobilized illegitimate band offices when invited, and helped to stabilize band politics by assisting in democratic elections. Gang members donated money for sports projects and closed down shooting galleries, crack houses and other unsavory neighborhood institutions. The gradual eclipse of an organizing principle centered on “protection” by drug enterprising practices toward the late 1990’s, however, would unhinge the moral compass of the gang, transforming the organization from a pool of community support and solidarity into an agent of destruction.

Over the years, the Manitoba Warriors established themselves as a well organized conglomerate, less likely than other groups to be involved in low-level and mid-level crime. Members of the Manitoba Warriors will often refer to their gang as "1323". The "13" and "23" stand for the respective positions in the alphabet of "M" and "W". Senior members of this gang were once known to wear vests and jackets with the gang's patch on the back (similar to Biker gang tradition) also marked status levels by tattoos and ranks. Each member of the Manitoba Warriors hold a specific ranking (similar to Biker culture): a president, vice-president and sergeant-at-arms, and strikers. Would-be members must serve an apprenticeship, called "striking," just as in Biker gang culture. Winnipeg's gang unit database had 300+ active and 143 inactive members, almost all adults in 2000. The Manitoba Warriors leaders began seeking control of the Winnipeg drug trade in 1995. Their first target would be the Manitoba Hells Angels Motorcycle Club. The Hells Angels were the main distributors of methamphetamine and crack cocaine but lacked numbers so the larger Manitoba Warriors began robbing the Biker gang of its drugs. 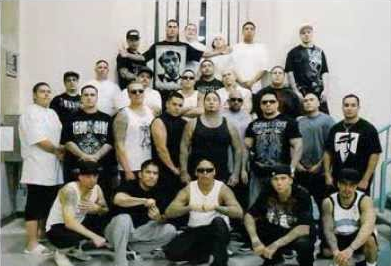 The Manitoba Warriors are known to associate with other criminal organizations, distancing senior members of the gangs from daily criminal activity and police scrutiny. As a prison gang, they have been reported primarily in the Edmonton Institution, Headingley Correctional Institution and the Stony Mountain Institution. Neighborhoods frequented by this gang include The Maples, West End, West Kildonan, Weston, West Broadway, Point Douglas, Elmwood and Tyndall Park, but their main territories are located in the Central and North End neighborhoods of Winnipeg. The Warriors are also represented in other cities and Provinces by other organizations adopting the "Warriors" banner such as the Alberta Warriors and Saskatchewan Warriors. Their enemies include the Native Syndicate, Hells Angels, Redlined Support Club, Redd Alert, Indian Posse, Most Organized Brothers, Mad Cowz, the Central Gang and Zig Zag Crew.

Rise of The Manitoba Warriors

Fatal Shooting of Teen Believed to be Targeted Gang Attacks

THOSE MONKEYS IN THE WHITE IN THAT PICTURE ARE FUCKEN SNIFFERS!! tryna make your guppie click look big you ip roll outs

we necchis should all unite nm shooting @ each other....show the leftover hells angels(nazis)whats up here on our native land -886r-a<3