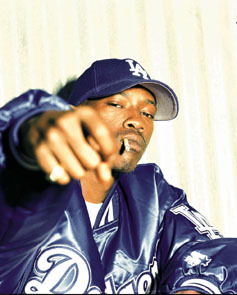 Kurupt, born Ricardo Brown, is an African-American westcoast rapper who was originally from Philadelphia, Pennsylvania. Also known as Kurupt Tha Kingpin, Kurupt Young Gotti or "Young Gotstra", Kurupt was the former Executive Vice President of Death Row Records and is the younger cousin of rapper RedRum781. He is a member of the rap group Tha Dogg Pound, and is mostly known for his work with Death Row Records. He is also a member of the hip-hop supergroup The HRSMN. Kurupt was signed to Death Row Records as part of the two-man crew called Tha Dogg Pound in the early 1990's gaining maximum exposure by appearing on Dr.Dre's breakthrough album, "The Chronic", during which Kurupt and Daz Dillenger developed a close working relationship. Tha Dogg Pound were heavily featured on Snoop Dogg's debut album "Doggystyle", even given their own song alongside The Lady of Rage, "For All My Niggaz & Bitchez." Tupac Shakur's 1996 murder began a mass exodus of artists from Death Row Records. Kurupt was one of the first to leave, preceded only by Nate Dogg; he initially signed with A&M, on which he founded an imprint, Antra Records (it was through this deal Kurupt released his debut solo album Kuruption! in 1998).

We Can Freak it