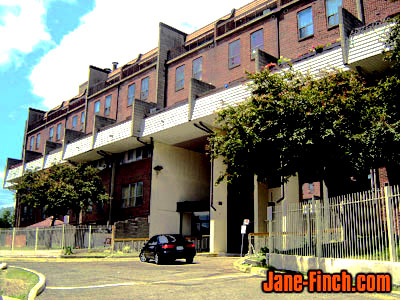 10 Eddystone Avenue is a geared to income complex building in the southern regions of Jane and Finch in the western suburb of North York in Toronto, Ontario, Canada. It is located off of Jane Street just south of Yorkwoods Gates and north of Grandravine Drive. Although no stranger to violence, this apartment complex has not been plagued from gang related activity or claimed as turf by any particular set, unlike the Grassways and Grandravine Drive communities. The building itself was constructed in the 1960's and is said to have two abandoned floors referred to as "The Dead Floor" by area residents. Most inhabitants of this complex are new immigrants and have traditionally been so. Cambodian and West Indian families are the largest identifiable groups in Eddystone, with a small percentage of Europeans still living within the area.